Kasym-sheikh was an acknowledged religious leader during the reign of Abdullah-khan II (1561-1598), the most successful khan of Shaibanid dynasty. His body was laid to rest in Kermine (at present time Nawoiy). However one of urban quarters in Bukhara formerly bore the name of Kosim-sheikh. There also is a mazar, known as the holy grave of Kosim-sheikh. Near to the mazar there is a well. People consider that water from this well is curative, believing that Kosim-sheikh miraculously made the well. In Kermine there is a big khanaka-mosque (XVI), called thh – honaqoe Khanaka of Kosim-sheikh. 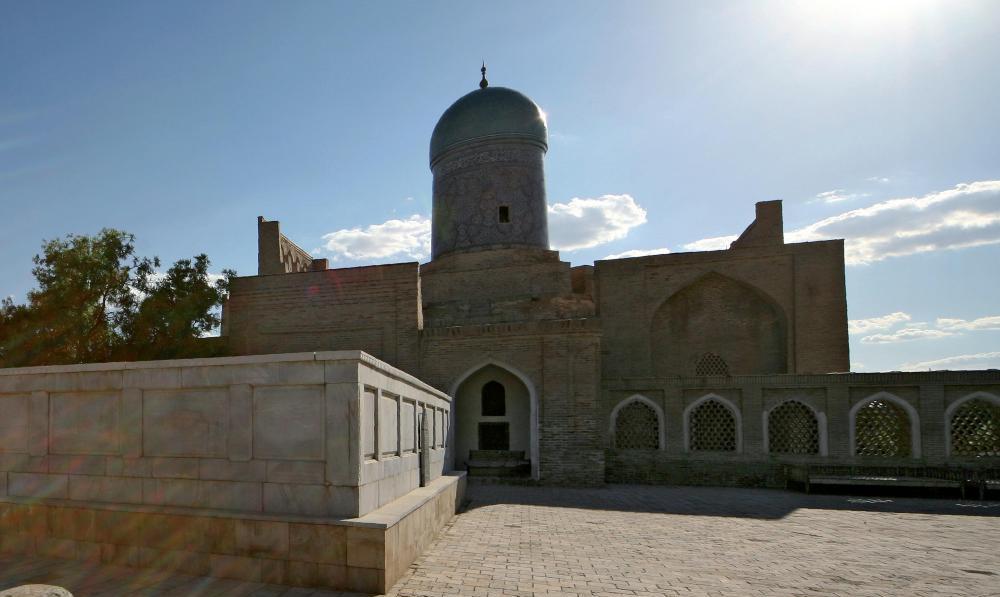 Architectual complex contains three buildings – a burial place of the Shaikh – honaqo, and two haziras ( surrounded paces) under the open air. The oldest one among them Kosim-sheikh’s hazira. This building is said to have been erected by sufiy Sheikh himself and before his death it was used as a preying place for the local prayers.
In the overall composition dominates the dome on a high drum with traces of majolica cladding based on intersecting arches girth. The central dome and cupolas of angular interiors decorated in the form of elegant stucco lampshades on grids thyroid sails.
In 1910, the south-west of khanaka, was constructed a second fenced yard with dakhma, summer mosque, and outbuildings.It should be noted that in the territory of Khanaka buried father of last Emir of Bukhara Alimkhan, Sayyid Abdul Ahad Khan Bahadur.
He is buried in front of the tomb of Sheikh. According to scientists, the ruler Abdulahadhan deeply believed in the ideas and teachings of Sheikh Kasim, that was the reason for his burial next to this man.
Kasim Sheikh Khanaka distinguished by some pretentiousness plan and overall composition. Facades are niche portal adjoined side wings walls with single-tiered arched niche; the main facade is highlighted with peshtak.
Central Hall underlined decorative domes on a very high drum, which is based on a system of diminishing octagons.
Today, in accordance with the state program for the restoration and reconstruction of historical monuments in Kasim Sheikh Khanaka are already approaching the end of work on the restoration of the lost species and summer mosque dakhma.